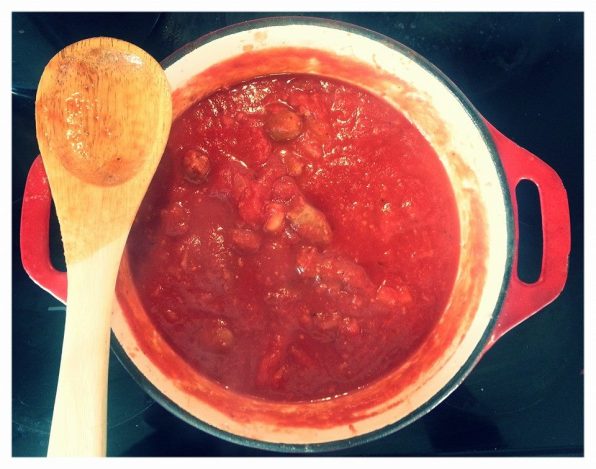 Well ‘back to school’ time is almost upon us again. Every year I feel torn at this time between the craziness of summer with the kids and the comfort of the routine of school. I have to be honest and say that there was a time when I didn’t think much of the notion of having a dinner plan for the school week. I used to think that it would take too much time to do and took the spontaneity out of food. Then, of course, as the kids came along and got a bit older, I learn that ‘spontaneity’ was a luxury that ironically, someone with time would have!

This last school year, I found it not only invaluable but absolutely essential to plan the week of dinners in advance. If I didn’t I found that I either had nothing really to cook when I got home or I would spend too much money buying ingredients for one-off meals that hadn’t been properly thought through. This ultimately meant a lot of waste in the kitchen aswell. I suppose this is all just about good housekeeping but for me, I didn’t really learn what that meant until the kids came along. You don’t want hungry tired children finishing school with no dinner in sight. Life is too short for that!

The weekly dinner menu does get predicable but they are all dinners that are made from scratch, made relatively quickly, have plenty of vegetables and flavour at their core and the kids love them. Our meals include the predictable spaghetti bolognaise, chilli, chicken curry, pork meatballs and pasta, homemade fish fingers with potato wedges and veggie frittata (which is basically a massive omelette containing vegetables mainly potatoes).

Monday’s dinner is always based on leftovers from the Sunday roast. If we’ve had roast chicken, the leftover chicken (you’d be surprised how much meat you can get off the carcase) is bulked up with plenty of vegetables to make a chicken curry. This could even be done on the Sunday evening but that’s always been wistful thinking on my part.

The kids’ favourite is meatballs in tomato sauce. We use our own Fennel and chilli meatballs from the shop but you could use a good sausage that has the flavours that you want to taste in the finished sauce. Our hot Italian sausage does the job well as does Jane Russell’s Fennel and chilli sausage. Find a highly flavoured sausage with high meat content that your family likes. You could fry off the sausages directly and roughly chop them or use the sausage meat as follows.

For a meal for 4 there is plenty in 500g of sausage meat. Squeeze the meat from the casings into a bowl – kids love doing this! Smell the meat. If it seems to be lacking on the aroma front you can add some finely chopped red chilli or garlic to your taste, a teaspoon of cayenne pepper and maybe a tablespoon of ground fennel. Mix well with your hands and form into meatballs. Colour the meatballs gently in the bottom of your casserole pot. They don’t need to be fully cooked through but just firmed. Add a finely chopped medium onion at this point. When the onion is softened a little, add a full 700g jar of passata. Find a brand that doesn’t have sugar listed in its ingredients. It should only contain sieved tomatoes and a little salt. Let the pot bubble away for about 30 minutes on a very gently heat. If you have good sausage meat with plenty of flavour either in it or added, these flavours will leech out into the tomato sauce. Finally, to add some extra fibre, strain a 400g tin of Barlotti beans and add towards the end to heat through. Once cooked, taste and check for seasoning. If the passata you’ve used is a bit acidic, you might want to add a teaspoon or two of sugar to balance the flavour. This is actually a very quick dinner to make and there is always a queue for seconds!

First published in The Western People on 24th August 2015.

Velvet Cloud is a sheep’s milk yogurt made by the Flanagan family in Rockfield, Claremorris. Why would you go to the trouble of milking sheep you ask? Especially when considering the relatively small milk yield of the sheep in comparison to the massive yield of the cow.

As well as all that, sheep’s milk wins hands down in terms of nutrition when compared with cow or goat’s milk: higher in protein, Vitamin C (a whopping 10.3mg per cup), Vitamin B12, Folate, Calcium (almost twice that of cow’s milk) and magnesium (twice that of cow’s milk also). It is also lower in lactose which might suit people that have mild lactose intolerance.

And now for the taste test – sheep’s milk is divine! It’s super creamy and mild. So why are we not drinking more? I suppose, if you are going to milk an animal for a living, you are more likely going to milk a cow which would give on average across the seasons 20 litres of milk a day. A sheep will produce 1 to 2 litres per day. The Flanagan family decided to go with the nutritionally better sheep’s milk and decided they were going to do something special with their product.

It takes dedication to milk sheep. Apart from the lower yield, they are naturally prey animals so the ‘let down’ reflex can be affected if startled and therefore milk production. But the Flanagan family on their farm in Rockfield have been milking sheep and working on getting their yogurt, Velvet Cloud, just right over the last three years. Michael and Aisling spent over a decade living in France and Italy where they saw the popularity of Sheep’s milk products. On returning to Ireland they noticed the marked absence of it in a country where sheep thrive on luscious green grass. The idea of Velvet Cloud was born.

Aisling and Michael started selling their yogurt in mid June 2015 when they quietly launched it on their twitter and Facebook pages. The response was instantaneous. They experienced astounding interest from chefs and retail outlets as they had hit on an obvious gap in the market and also had produced a deservedly well received delicious product. The couple have not been daunted by the massive interest since June and their yogurt is now available across the country in shops as well as on menus. In Dublin, the yogurt is available in Caviston’s in Dalkey and Morton’s as well as the following markets: The Temple Bar market, Honest2Goodness Market and the People’s Park Market, Dunlaoire. Down here in the West it is available in Morton’s and McCambridge’s in Galway, and Rua and De Búrca’s in Castlebar, O’Connor’s SuperValu Westport, SuperValu and The Food Store in Claremorris to name a few, as the list is growing daily. It is featuring on many menus including the Michelin starred Aniar in Galway.

I love these stories of people who have put in such hard work over years developing and researching to the point where they have a product that they are really happy with, a product that is pure and from the land. Their yogurt is their sheep’s milk, milked on their farm and brought to the dairy on their farm where all that’s added to it are live yogurt cultures – that’s it! No sugar or preservatives, nothing else. It’s real food made on one farm from start to finish. And I love how they then tentatively let it out into the big world to see if something would happen only to find a great reception for a great product. In the space of a few months, their product has left their farm and is successfully reaching people all over the country. Aisling and Michael should be very proud of what they have achieved – proud and tired! 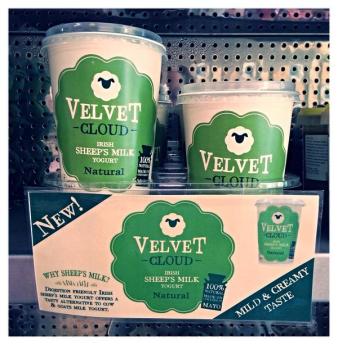 When people see the De Búrca logo for the first time, we are always asked ‘Why the flying pig?’

It started in Nenagh, Tipperary. We felt we were going nowhere in terms of work. I was employed with the HSE as a Medical Scientist and Sean was a butcher working in a local shop. We were living in a modest house and the girls were in a crèche all day. We had always talked about opening our own shop… for years. We are real foodies.  We did everything except open the shop – we had a blog and practiced our sausage recipes. I suppose we were afraid of doing it because most people would think that it would be a crazy thing to do to give up ‘good’ jobs in a recession. But we didn’t feel we were getting anywhere productively in our work, and we weren’t happy and we wanted…